Palmeras en La Nieve (Palm Trees In The Snow), is the 2015 melodramatic film, directed by Fernando Gonzalez Molina, based on the novel by Luz Gabas. It tells the story of two star crossed lovers; Kilian, a colonist and son of a cocoa plantation owner, and Bisila the daughter of a chief of an indigenous African tribe(Bubis), set in the 1950's on the island of Bioko in Equatorial Guinea(often as referred to as Fernando Po) when it was transitioning from colonized territory(de facto slave territory) to an independent republic.

The story is seen through the eyes of Clarence, the niece of the main male lead, Kilian, an elderly man in present time, in his last days, suffering from Alzheimer's and seemingly trapped in the past. Having recently lost her father, Jacobo; brother to Kilian, Clarence travels to the sprawling family estate in Spain, to help get the family affairs in order as well as gain some clarity about her own father, whom she realized that she knew very little about. At the family home she discovers Kilian's diary, along with letters and documents, that show an ongoing connection to a family on Bioko. In her quest to learn more about her family history, she embarks on a journey of truth and discovery, that proves to be enlightening, disturbing, inspiring, and horrific. 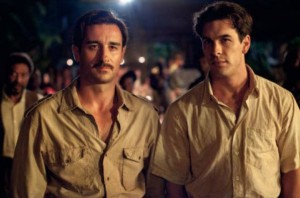 With a running time of 2 hours and 43 minutes, Palmeras en La Nieve is an epic film, with significant time given in dedication to character development. I emphasize, "given in dedication to", because although the main characters(Kilian, Bisila, and Jacobo) are on screen carrying the majority of the scenes, there are a number of instances when the actions and motivations do not ring true to their background, biographies, and/or the storyline. 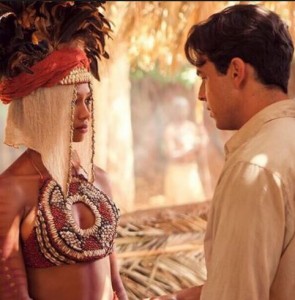 However, with the richness of the cultural, social, and political background in which this is set, and a well coordinated blending of historical and present day plot lines, the character inconsistencies are not a distraction to the overall film. And performance-wise, strong character portrayals were turned in all around.

With a love story at its core, the strength of the film, truly hinges on the bond and relationship between Kilian and Bisila, and in this arena, the film delivers, and then some. The on screen chemistry between Kilian, played by Mario Casas, and Bisila, played by newcomer Berta Vasquez in her first(ever) film role, is sizzling.

From the first introduction of Bisila, the tension and attraction between the two leads is obvious and believable, and builds throughout the film to a palpable, undeniable level. Their romantic intensity also provides a measure of distraction for shortcomings in other areas.

Though the clarity of Kilian and Bisila's passion also accentuates the clumbsy attempt to portray a budding relationship between Clarence, played by Adriana Ugarte, and Iniko, played by Djedje Apali. 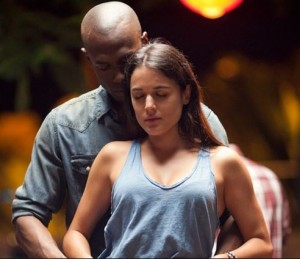 Their awkward interaction and out-of-the-blue "attraction" falls easily into the aforementioned bucket of characters that do not ring true.

Granted, I have not read the novel, that this film was adapted from, so it is quite possible that some of the character shortcomings, and plot line issues are a result of transferring a literary work into a time limited visual one.

Overall, I thoroughly enjoyed the film as a whole, and I give it an 8.5 out of 10. The technical shortcomings prevent me from officially rating it higher, though fans of the love story genre may rate it higher. On a personal level though, I might rate it slightly higher, just on the strength of it generating internal debate on the meaning, perspective, and significance of particular elements, after the fact.

Lastly, for those with a keen global eye, I'd keep a look out for Berta Vasquez. I think she's going to be one to watch.